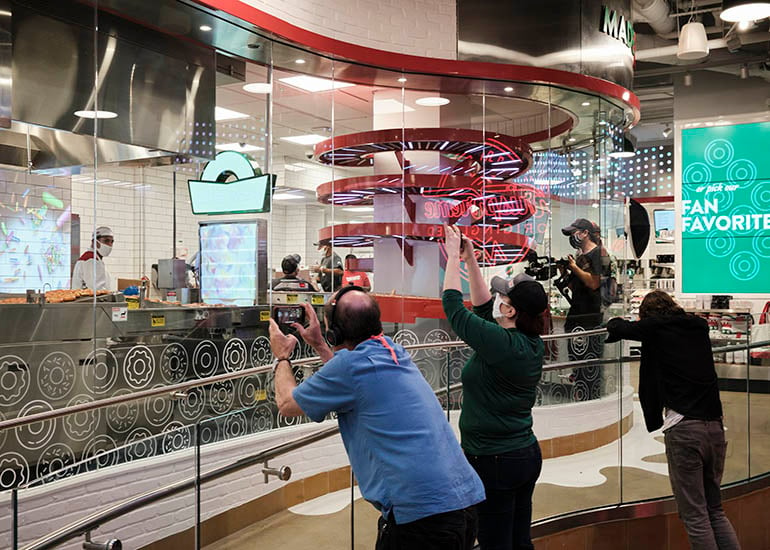 The iconic doughnut chain, Krispy Kreme, has an almost cult-like status with fans in 32 countries. The brand already had a high profile, but it has pushed that reputation a notch higher with the opening of an experiential flagship store in New York’s Times Square.

The store, described as a ‘Doughnut Theater’, boasts many spectacular digital elements, including the world’s largest rotating HOT NOW sign, the largest glazed waterfall and LED digital conveyor belt. Add the sights and smells of the whole production line and visitors enjoy a truly immersive experience.

New York is ‘the city that never sleeps’, so it’s no surprise that locals can get their Krispy Kreme doughnuts 24 hours a day. And while they’re waiting to collect they can watch the whole tempting production process and enjoy an entertaining, immersive series of displays.

Outside is a 15-foot rotating HOT NOW sign, a wraparound digital billboard and an LED digital conveyor belt displaying themed graphics. Inside are digital menu boards and digital columns with themed graphics, branded video walls, a Doughnut Theatre with 35 separate projection mapped shows, digital tables with embedded displays and programmable lighting and audio that syncs to the Doughnut Theater shows.

Adding to the fun atmosphere is a massive glazed waterfall for customers to watch doughnuts running through, stadium style seating inside a giant Krispy Kreme box and New York themed merchandise.

Electrosonic was involved at an early stage as the technology lead working with Second Story, Bravo Media and the Krispy Kreme project team to determine how to use the iconic brand elements and the available structures to create the Doughnut Theater.

This show is big and brassy and it aims to hit New York hard with its brand messaging. The HOT NOW sign weighs in at 8000 pounds and incorporates lights normally found on airport runways. Unmissable is an understatement.

The client wanted to stay on brand in a low key way, entertain customers and make the store a happy place, but without making the technology visible. The overall aim was to create the very best guest experience but not to overwhelm people, which was a delicate balancing act.

The show had to whet people’s appetites for the product as they made their way through the store, but not to distract them too much so the theater shows had to be short but impactful.

Electrosonic worked closely with Krispy Kreme’s marketing group and the creative team at Second Story and Bravo Media, providing blue sky technology concepts as well as detailed audiovisual design to bring the fun concept to life. We developed specialty projection mapping techniques to deliver the short but spectacular Doughnut Theater shows, and used specialty audio and acoustics techniques to achieve levels that were comfortable but clear throughout the 4500-square foot store.

Krispy Kreme’s first global flagship shop showcases the brand in the most iconic city in the world, offering an immersive and interactive doughnut experience that keeps customers coming back 24 hours a day. Video, audio, projection mapping and the smell of doughnuts cooking create a truly multi-sensory experience. The show created such an attraction that it drew record numbers in its opening despite the impact of lockdown. 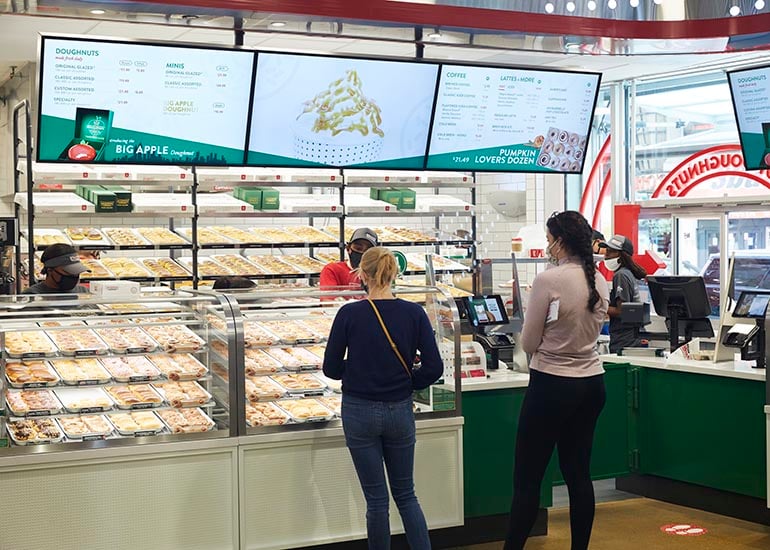 We don’t brag, but this is a way for us to be on brand and just entertain and make it a happy place. It’s really just spectacular entertainment and it has brought lots of energy to the room.
Todd Hoffman
Digital Lead, Krispy Kreme 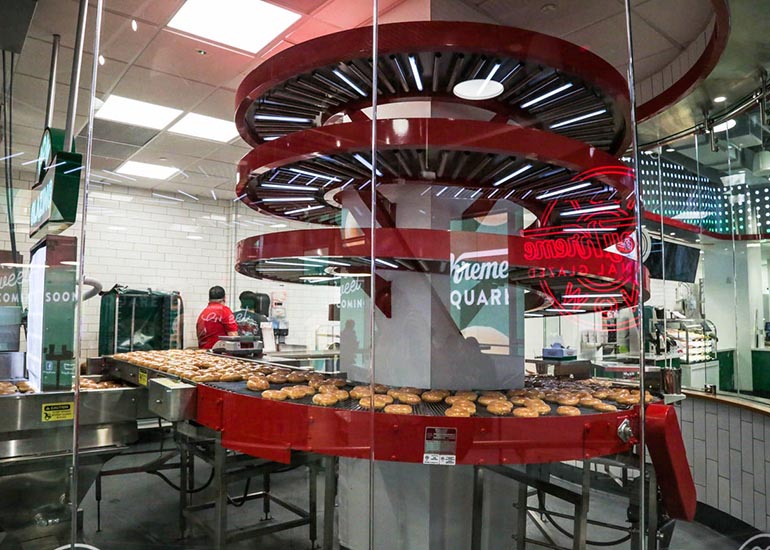