MUSEUM OF THE AMERICAN REVOLUTION

Three hundred years on, the Museum immerses visitors in the sounds, events and experiences that drove the American colonies to revolution.

Recreating the ideas, events, people and legacies of America’s revolutionary origins is no easy challenge. The Museum of the American Revolution uses innovative audiovisual to bring to life the sights, sounds and experiences of the young nation in the eighteenth century. Imagine the footsteps of marching armies, the sound and fury of the battlefield, the heated discussions in parlors or the quiet ‘calm before the storm’ of a military commander’s tent — audiovisual can do that and more. The organizers wanted to convey the complexity and the continuity of the American Revolution. It wasn’t an event, or a moment in time. It was a movement and an ideal so big that the Museum states, ‘You don’t know the half of it’.

Big ideas need big solutions. The size and scope of the project is enormous and the Museum draws on the full potential of audio, video, immersive experiences and interactive touchscreen displays from Electrosonic. Visitors can get close to the action and the great decisions made inside the original command tent used by General George Washington during the American War of Independence. They can board a replica privateer vessel and relive the sounds of revolutionary sailors as they prepared to seize Royal Navy ships and disrupt British supply lines.

There’s a battlefield recreation where special effects and audiovisual combine to immerse the audience with the vibration of marching soldiers’ footsteps, the sound and smell of smoke and gunfire and the furious sounds of intense fighting. In a special gallery dedicated to the Oneida Indian Nation, visitors can stand among tribal elders and listen to their heated debates — should they side with Washington or the British? With so much complex information to convey, interactive touchscreen displays, multitouch monitors and introductory videos play a key role throughout the Museum. A revolutionary approach to revolutionary times.

The challenges like the Museum itself were big and complex — grand themes in small spaces. Take the Washington tent. It’s original, carefully preserved for over three hundred years - not something to interfere with lightly. The task was to recreate moving figures inside the tent through projection, but the light from the projectors had to be carefully controlled to avoid damaging the fabric of the tent. And, the installation had to be built for minimal maintenance to reduce the number of service visits to the tent.

The organizers wanted the audience to experience the sensations of a marching revolutionary army with full 4D impact in a small space. Innovation was essential to recreate the footsteps, the intimidating effect of gunpowder smoke and the blinding lights of battle. On board the privateer, let visitors experience the excitement on the dock, the work of sailors unloading their captive cargo and the sound of birds around the quayside. That takes some powerful, creative audio. Add dozens of interactive displays, some with more than 30 active touch points — sophisticated show control would be a priority.

Electrosonic collaborated with architects and contractors to provide a complete design-to-build service that fused architecture, storytelling and technology. Edge-blended content, integration of special effects, lighting and video, shaking floors and powerful point-source audio create dramatic immersive reconstructions of key events of the Revolution. Audio is integrated with the contents of a replica ship and architecture is used as projection surfaces for the Museum’s complex smaller spaces.

Since its opening in 2017, the Museum has attracted more than 600,000 visitors annually and achieved a number of prestigious awards, including the 2018 Excellence in Exhibitions Award for Special Achievement from the American Alliance of Museums. The Associated Press commented that the Museum has landed a decisive victory in capturing tourists’ attention in a city with lots of revolutionary competition. 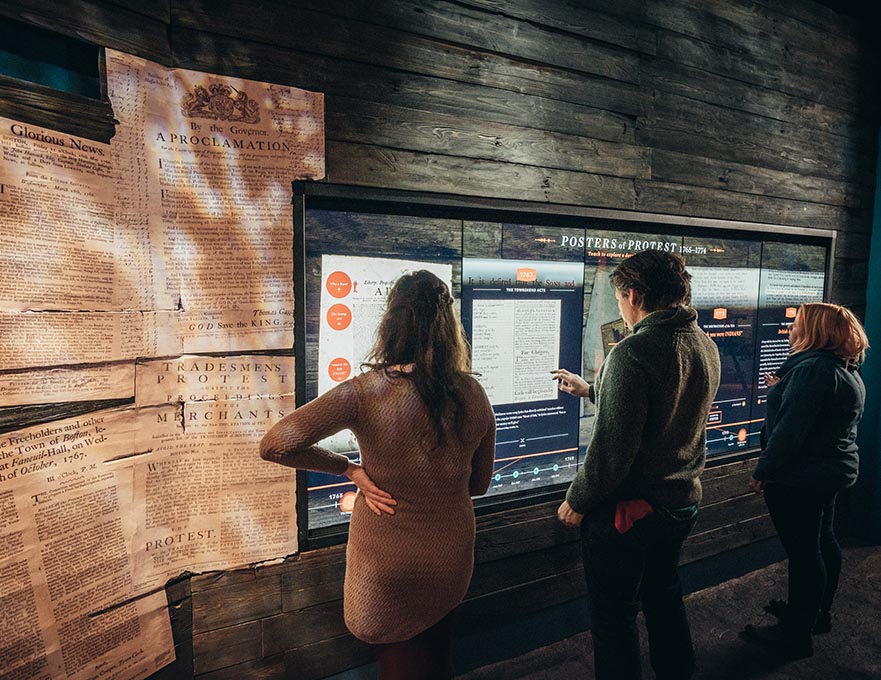 The immersive exhibits infuse 18th century history with distinctly 21st century theatrical shock and awe. The guiding design idea was ‘creating a movie you can walk through, rather than a book we’re illustrating.’ Visitors can easily float through on the immersive effects and clever set pieces. But there are constant invitations to dig deeper into objects, documents and complex ideas.
Jennifer Schuessler
The New York Times