REVEALED: THE HUNT FOR BIN LADEN 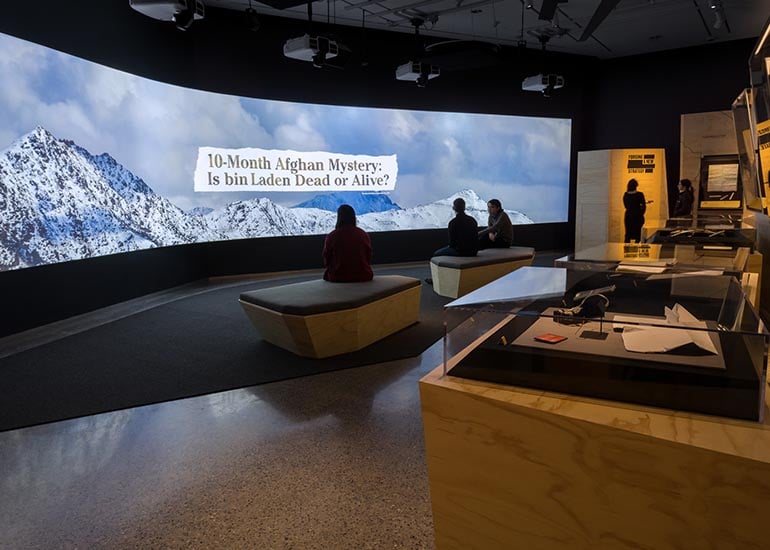 A special exhibition at the National September 11 Memorial & Museum tells the inside story of the global 10-year hunt for Osama bin Laden. The exhibition gives visitors access to newly declassified artifacts as well as first-hand accounts from intelligence and military figures involved in the manhunt.

Electrosonic worked in creative collaboration with Hadley Exhibits, Batwin & Robin and C&G Partners to design and integrate the audiovisual and control elements for the exhibition, providing expertise in immersive and focused audio and complex projection blending to bring the story to life.

‘Revealed: The Hunt for Bin Laden’ recreates a real-life detective story previously shrouded in secrecy. The story unfolds in six parts from the early terrorist attacks on US embassies and warships before 9/11 to the climax when a US Navy SEAL unit attack and kill bin Laden in his compound.

One of the key elements in the exhibition is a 40-feet long panoramic wall that immerses visitors in the teamwork of analysts, President Obama and other government officials, and military and intelligence officers as they assess information.

Electrosonic carried out detailed projection studies to design the optimum solution for a complex 5-projector blend on the curved wall. To add to the complexity, the projectors were mounted on a low ceiling with strict requirements for sightlines.

In the room dedicated to the final attack, black walls recreate darkness of the raid. Sophisticated projection-mapping of images on a scale model of bin Laden’s compound bring the final planning and the attack to life.

Electrosonic acted as creative collaborators and key technology partners, providing project management and engineering support to the Museum team and the exhibition designers to ensure that audiovisual technology could play a full role in this dramatic story.

Putting together an installation in the National September 11 Memorial & Museum presents special challenges and complexities because of the nature of the space and its security requirements.

Low ceilings made calculations for projection mounting complex, particularly for projection blending on the massive curved projection wall. The Museum team also wanted a standalone audio and control system so they could control the special exhibition separately from the rest of the venue.

Electrosonic was able to overcome the site challenges through previous experience with the Museum. Careful planning and projection studies, coupled with Electrosonic’s expertise in immersive technologies, ensured the complex projection mapping and projection-blending solutions provide visitors with optimum viewing. Electrosonic’s project management and engineering teams worked closely with the Museum team and Hadley Exhibits to coordinate and support the facility requirements and meet the tight installation schedule.

‘Revealed: The Hunt for Bin Laden’ brings a dramatic manhunt to life with the full power of multimedia and immersive experiential technologies. Visitors become immersed in real-life planning and discussions and experience the high drama of the final raid on Bin Laden’s compound.

Coupled with the many fascinating artefacts and contemporary media, technology brings the visitor into the center of the action in a compelling way.

The exhibition looks fantastic and communicates through its installations a complex yet meaningful story that is a worthy addition to a visit at the 9/11 Memorial & Museum. Reaching this moment has only been possible through the creative collaboration with Hadley and Electrosonic.
Ian Kerrigan
Senior Vice President, Exhibitions, National September 11 Memorial & Museum 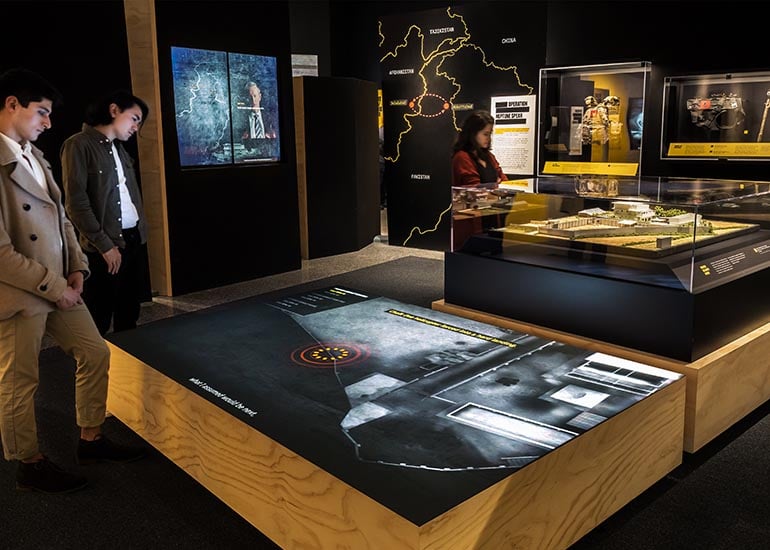 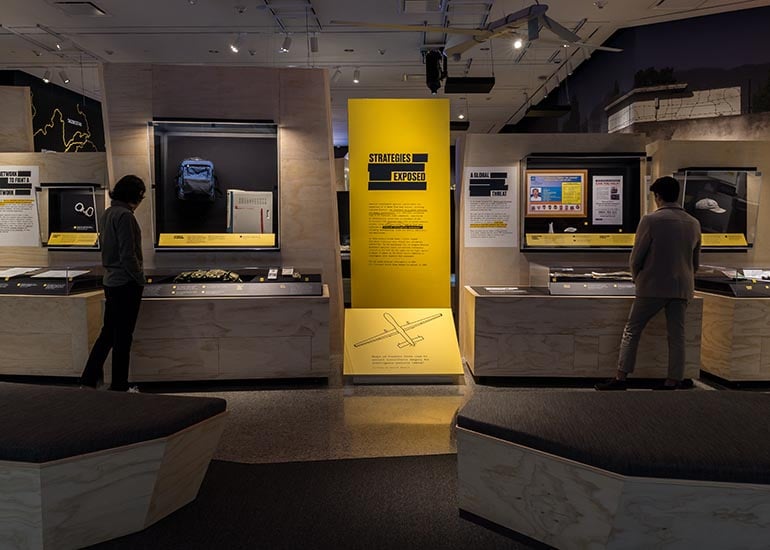