It’s not easy to recreate an iconic 14th century event in the absence of any artefacts or archaeological evidence. But, to celebrate the 700th anniversary of the Battle of Bannockburn, one of the most decisive battles of the first War of Scottish Independence, the National Trust for Scotland decided to do just that. The centrepiece of a new visitor center was to be a lifelike recreation of the battle scene.

The experience had to be truly immersive with visitors becoming part of the scene witnessing the sights, sounds and chaos of an ancient battlefield. The Battle Room, designed by Bright White, had to recreate the terrain through complex projection and give visitors the experience of leading one of the battalions in realistic fight scenes. Traditional filming techniques could not provide the realism. Motion capture would create a more intense spectacle, but it had to be scaled up to epic proportions.

The Battle Room features a world-first fight choreography and advanced motion capture technique to immerse visitors in a realistic 3D battle. Complex projection maps the terrain while touchscreen technology lets visitors participate by generating troop movements and competing on a virtual battlefield. The battle scene is part a seamless interpretation — a 3D prologue introduces the circumstances and characters and a 3D epilogue completes the experience.

The Center has proved extremely popular attracting large numbers of visitors all year round. By using immersive and interactive exhibits the Center leads visitors through the story with an enjoyable and memorable learning experience for people of all ages. Technology engages visitors in the strategies, sights, sounds and sensations of an ancient battlefield in a contemporary way with an amazing degree of realism — interpretation with impact. 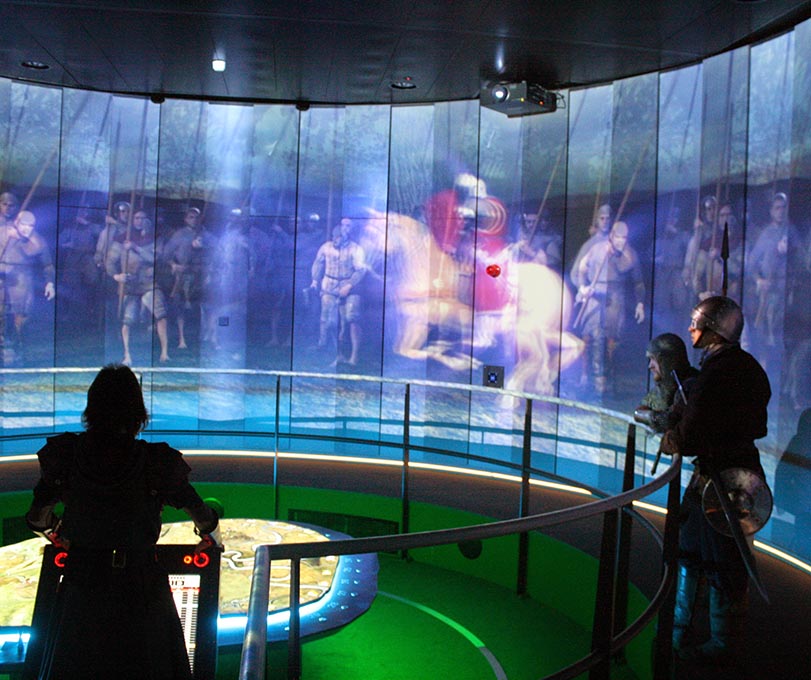 Visitors are immersed in the heat of battle, surrounded by the sounds of war, cavalry charges and whizzing arrows.

There are very few companies who have the technical expertise and experience to be able to design, install and maintain such a sophisticated and immersive audio visual experience that involves synchronised systems. For the National Trust of Scotland this has been a very adventurous project and we’ve really relied on the expertise of Electrosonic to deliver it and I testify to the quality of the service provided.
Tom Ingrey-Counter
Interpretation Sub-Project Manager, Battle of Bannockburn Visitor Centre