Looking Back at a Decade of Opportunity

Each time we hit a new decade, it is always fun and often rewarding to take a look in the rearview mirror to see how the company has progressed. The past 10 years represent a decade of significant growth for Electrosonic.

Since its inception, Electrosonic has always had a very global view. However, the past decade has seen the company make a defined splash in various regions of the world. Specifically, Electrosonic has become a leading AV within the rapidly growing Middle East including award winning museums and world renown themed attractions. Asian markets have also surfaced as prime spaces for Electrosonic.

A prime example of Electrosonic’s work in Asia came at the beginning of the decade with an expansive role at Shanghai Expo 2010. EXPO 2010 in Shanghai was the biggest EXPO ever with 73 million visitors. Electrosonic was responsible for the AV installations in three major pavilions. During the installation phase it had 35 people on site, and had a substantial support staff presence for the duration. For two of the pavilions, the USA and the Information and

Communications Pavilions, Electrosonic was contracted to BRC Imagination Arts; it was contracted directly to the client in the case of the Shipbuilding Pavilion, where the exhibit designer was Ralph Appelbaum Associates. Electrosonic’s Shanghai office provided essential support to clients throughout the EXPO period.

That same year, Electrosonic also completed worked in Africa with its long-standing customer, the World Health Organization (WHO). Electrosonic has equipped a number of Strategic Health Operations Centers (“SHOCs”) for the WHO, possibly the most remote being that in Brazzaville in the Democratic Republic of Congo. This control room installation was completely prefabricated and client-approved at Hawley Mill in the UK before delivery to site in 2010.

A display of its expansive European presence, Electrosonic worked on the Olympic Museum in Lausanne, Switzerland, reopened to the public in December 2013 after a two-year renovation. The exhibition marked extensive use of AV and interactive techniques. Electrosonic designed the AV system under sub-contract to Centre Screen of Manchester, the media producer, and carried out the system engineering and integration under a separate sub-contract to Paragon Creative of York, the exhibition fit-out contractor.

Expanded presence at various industry events covering multiple disciplines has played an instrumental role in broader market expansion. For instance, Electrosonic has a larger presence at the annual IAAPA events in addition to adding its own events in Vegas to the regular roster. Each event is an opportunity for new and existing customers to meet with key Electrosonic personnel and get a feel for some of the company’s latest projects – often demonstrating creative uses of AV technology.

Operating within a project-oriented environment, the goal with each new project is always to overdeliver by providing customers with deployments that not only tell the desired story, but also uniquely captivate.

In some instances, successful deployments reach levels that draw meaningful industry attention in the form of awards. Over the past decade, Electrosonic has been honored with an array of awards not only recognizing the success of individual deployments, but also shining a spotlight on the firm’s ability to serve as an optimal AVC partner as organizations across multiple industries look for ways to incorporate technology into their environments.

AV Awards. In 2012, Electrosonic won two awards at the annual AV Awards. One was a project-based award for “Consumer Installation of the Year” - the European Parliament’s Visitors’ Centre, which as a project also won the prestigious Sinus award. However, the second award for “Integrator of the Year” recognized Electrosonic as a company, independent of particular projects. The award recognized both the variety of the work undertaken by the company, and the way it has developed the business in the face of changing market conditions.

In 2019, Electrosonic took home the top honors at the AV Awards for the Themed Entertainment and Attractions Project of the Year. The winning project was Warner Bros. World™ Abu Dhabi, the world’s first-ever Warner Bros. branded indoor theme park, which transports guests to the lands of their favorite Super Heroes and Animated characters via interactive family-friendly rides, authentically themed lands and immersive experiences.

THEA Awards. As a fixture within the themed entertainment industry, Electrosonic has had the pleasure of contributing on various levels to many of the most recognized parks and entertainment environments in the world. THEA Awards focus on these individual projects recognizing the outstanding themed attractions each year. In 2016, IEMS (Integrated Environmental Media System) at the Tom Bradley International Terminal at Los Angeles International Airport received the Outstanding Achievement away for Environmental Media Experience and the One World Observatory received Outstanding Achievement for Attractions. The THEA Awards continued in 2017 with the Senate Immersion Module at the Edward M Kennedy Institute receiving the Outstanding Achievement (Attraction).

In addition, Electrosonic received the Commercial Integrator 2019 Best Museum Project for its extensive work on the Sheikh Abdullah Al Salem Cultural Centre (SAASCC). Electrosonic received the recognition during the InfoComm 2019 award presentation. SAASCC is located on a 13-hectare site in the Al-Sha’ab district of Kuwait City. The cultural center includes the Natural History Museum, Science and Technology Museum, Arabic Islamic Science Museum and Space Museum. Not only does this recognition highlight exceptional work building out an expansive museum space, it also serves as another example of Electrosonic’s expansive reach into different global geographies. 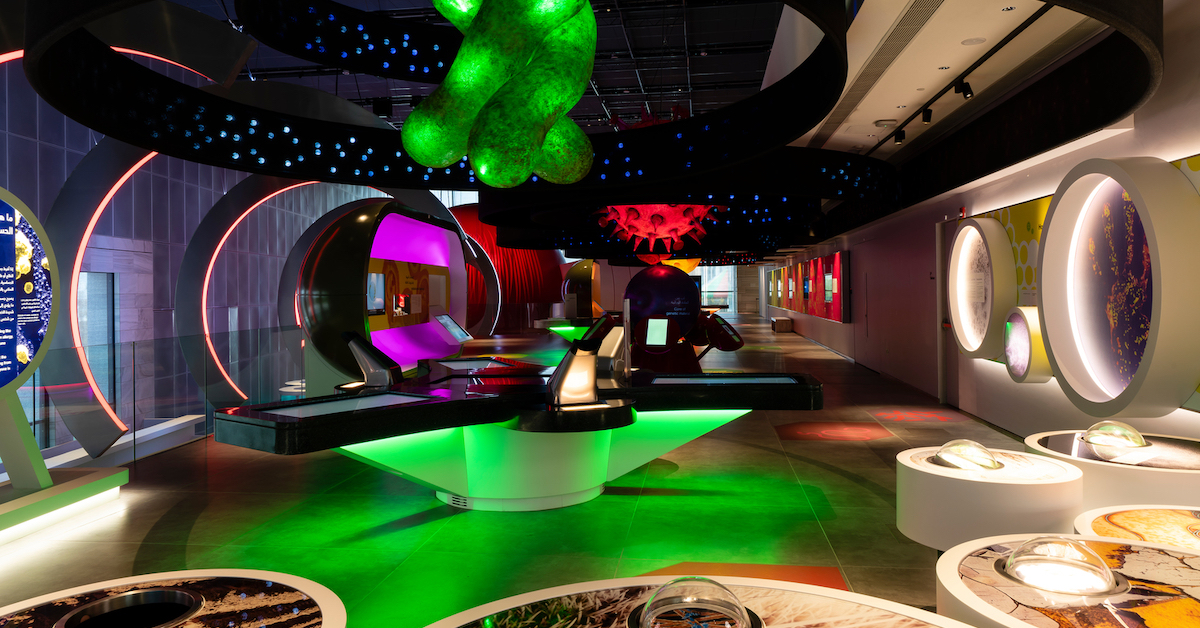 Each year, Electrosonic was also named as one of top 50 Integrators by SCN.

Next generation talent and leadership

Over the past decade, Electrosonic welcomed a new CEO with Jon Hancock coming on board as well as appointing Bryan Hinckley as President of Electrosonic Inc. and Donald Stuart as managing director EMEA.

Hancock’s focus not only encompasses opportunities to grow the business, but also to bring increased value to the company’s numerous multinational customers by bringing Electrosonic’s international centers of excellence closer together and broaden service offerings.

Beyond new leadership, Electrosonic has remained dedicated to constantly adding new talent, enabling the firm to always remain a top tier partner with a broad range of specialists capable of providing customers with access to expertise they need to thrive.

During this time, Electrosonic has focused heavily on ensuring that it has talent conveniently located around the world to provide a growing number of clients with top notch service around the clock.

We have strengthened our diversity and reach across various industries over the past decade. As a result, Electrosonic is deeply entrenching itself within each sector. Our specialized team of design and build experts have helped companies in entertainment and sporting venues, corporate environments, resorts and hospitality and themed environments.

Working in a wide array of industries ultimately allows Electrosonic to build upon its knowledge base, recognizing components that work within one industry and creatively finding new ways to apply similar technology usage in other parallel deployments.

We are truly grateful for each opportunity to work with clients and find exciting ways to bring ideas to life using the latest technology to deliver immersive experiences. If your organization has a story to tell, Electrosonic would love to work with you. Click here to learn more about how we can put our 55+ years of experience to work for you.

ANNOUNCEMENT TO OUR CUSTOMERS AND PARTNERS

The Evolution of Immersive Ride Technology: The Past, Present and Future of the Dark Ride